A full list of locations where you can pick up a copy of Dimly, Through Glass

Dimly Through Glass is my latest novel. It is a very dark tale of a haunted man. He is entirely unlovable and I will show you why. This story is not for the fainthearted. 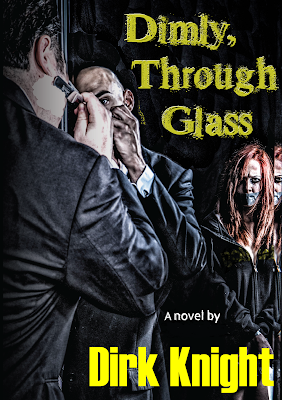 Dennis Foster is not too different from you and me, other than his inability to say no to those little synaptic flashes that catch in his brain. Dennis’s switch has been flipped. We all have the same hardware, all with short circuits in the wiring, but he isn’t able to kill the engine. Mr. Foster acts upon impulses we have all had—and many we haven’t. For Dennis sees himself only dimly, as though reflected only in part, and will come to know himself clearly, face to face with the venomous monstrosity truly shining back in the glass.
Dennis is driven by a sense of inadequacy and self-loathing, instilled in him first by his mother, and then by his failures with every woman who has tried to replace her. Though he has been given an opportunity to reclaim the masculinity, and control he relinquished so long ago, his troubled past and incomprehensible urges, buried and hidden for years, will boil over into a homicidal frenzy when he is forced to kill a man in self-defense. His carefully crafted façade will decay, leaving only the vulnerable truth. We are going to follow his descent and decomposing mental state, and trace the dark pathways that lead to the root causes of evil.
The good guy (every story needs one), though another dark character, is a virtuous rogue who has used his dangerous past to impel him towards the light. He is driven forward by the memories of the woman he loved, who was always too good for him, and his best friend from Operation Iraqi Freedom, both of whom he watched die.
Will good triumph over evil as so often happens in the movies, or will the demented, disjointed maniac fulfill his imagined destiny and shatter the innocence of his victims?

Pick up a copy at the following Phoenix area locations: